Radon is a radioactive gas that comes from the breakdown of Uranium in soil, rocks and water. It occurs naturally in the earth but can become a problem when it builds up indoors.

Why is radon the public health risk that it is?

Radon gas – even the name sounds ominous, evoking images of radiation and nuclear devastation is created when uranium in the soil decays.

EPA estimates that about 20,000 lung cancer deaths each year in the U.S. are radon-related. Exposure to radon is the second leading cause of lung cancer after smoking. Radon is an odorless, tasteless and invisible gas produced by the decay of naturally occurring uranium in soil and water. Radon is a form of ionizing radiation and a proven carcinogen. Lung cancer is the only known effect on human health from exposure to radon in air. Thus far, there is no evidence that children are at greater risk of lung cancer than are adults. 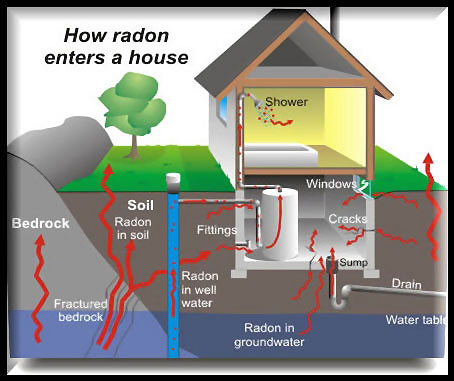 The gas then seeps through any access point into a home. Common entry points are cracks in the foundation, poorly sealed pipes, drainage or any other loose point. Once in the home, the gas can collect in certain areas especially basements and other low-lying, closed areas and build up over time to dangerous levels. The Environmental Protection Agency of the US Government has set a threshold of 4 pico curies per liter as the action level. As humans are exposed to the gas over a period of years, it can have a significant and detrimental effect.

Radon has been found in homes in all 50 states. Certain areas are more susceptible than others, but no location is immune, even here in WNY. Concentrations of radon-causing materials in the soil can be either natural or man-made. 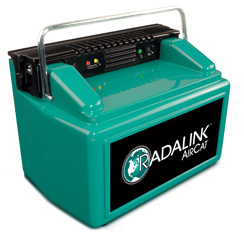 The monitor is placed in the home for a minimum of 48 hours.  During the testing period the monitor records the radon concentration, temperature, relative and barometric pressure at hourly intervals.  Upon completing the test, the inspector automatically uploads the data to Radalink right from the home.  Radalink will process the data, prepares a personalized report, reviews the data for evidence of tampering and delivers the report to the inspector, the client and even the Realtor, if designated, via email with a PDF attachment.

Radon testing is strongly recommended, for all homes, by the Environmental Protection Agency and the U.S. Surgeon General. Radon gas is a class ’A’ carcinogen and is the second leading cause of lung cancer in the United States. Radon does not discriminate between houses or geographical areas.

Testing for Radon levels requires placing measurement devices for a minimum of 48 hours, which should be considered when allowing for contingencies in the real estate contract. All testing is completed in strict compliance with the EPA and NEHA guidelines.

If high concentrations of radon are found in your home, you have several options. Since radon is only a problem when it is concentrated in high volume, improving the ventilation in an area is often sufficient to solve the problem. In other cases, it may be necessary to limit the amount of radon getting into the home by sealing or otherwise obstructing the access points. Once again, a professional should be engaged to ensure that the radon is effectively blocked. Typical radon mitigation systems can cost between $800 and $2500, according to the EPA.

If you’re buying or selling a home, radon can be a significant issue. Buyers should be aware of the radon risk in their area and determine whether a radon test is desirable. When in doubt, the EPA always recommends testing.  If test results already exist, make sure they are recent or that the home has not been significantly renovated since the test was performed. If in doubt, get a new test done. If you’re selling a home, having a recent radon test is a great idea. By being proactive, you can assure potential buyers that there is no risk and avoid the issue from the start.

So whether you have an new or old home – Radon is a reality. But it’s a reality that we can live with. Proper testing and mitigation, can eliminate Radon as a health threat. For more information, visit the EPA web site on Radon at http://www.epa.gov/radon.